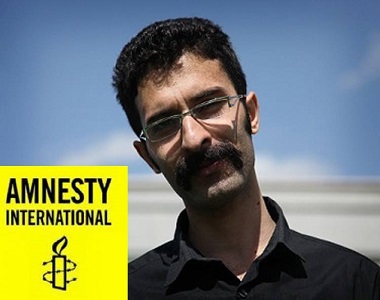 Saeed Shirzad, a 27-year-old human rights activist and an active member of the Society for Defending Street and Working Children, has been detained since 2 June 2014. He spent over two months in solitary confinement in Section 209 of Tehran’s Evin Prison, without access to his family and lawyer and under pressure to make a video-taped “confession”, before he was transferred to Section 8, where people jailed for non-political crimes are held. His lawyer has not been allowed to meet him in prison or even access his court file.

The authorities have not yet issued a formal indictment against Saeed Shirzad but they told him of the charges against him when they took him to the Prosecutor’s Office in Evin Prison on 18 August. These include “gathering and colluding against national security” and “propaganda against the system”. These charges appear to relate to his peaceful human rights activities, which include, according to the accusations levelled by the authorities, contact with the families of political prisoners and cooperation with the office of the UN Special Rapporteur on the Situation of Human Rights in Iran.

Saeed Shirzad has said that while he was in solitary confinement, Ministry of Intelligence interrogators accused him of supporting the banned political opposition group People’s Mojahedin Organization of Iran (PMOI), and regularly threatened to have him convicted of “enmity against God” (moharebeh) and executed. Saeed Shirzad has consistently maintained that he has no relation with the PMOI and the accusation is a spurious one, made merely because of his support in 2014 to the daughter of a PMOI prisoner who was at risk of dropping out of university, due to financial difficulties resulting from her father’s imprisonment. In a phone call from prison, Saeed Shirzad asked a friend to write a Facebook post on his behalf, saying that “as a human rights and children’s rights activist, I can see no difference between the family of a prisoner with organizational affiliations and the family of a leftist, liberal, Kurdish or Baluch prisoner.”

Saeed Shirzad had been previously arrested on 21 August 2012 when he and several other activists were in the earthquake-stricken town of Varzaghan in East Azerbaijan province to deliver aid to earthquake victims. He was held in Ahar prison in Azerbaijan province for 19 days and then released on bail. In January 2013, Branch 26 of Tehran’s Revolutionary Court sentenced him to one year in prison, suspended for five years.

Article 9 of the International Covenant on Civil and Political Rights (ICCPR), to which Iran is a party, provides that no one shall be subjected to arbitrary arrest or detention. Detention is considered arbitrary when a person is deprived of their liberty because they have exercised the rights and freedoms guaranteed in the ICCPR. Detention may also become arbitrary as a result of violation of the detainee’s fair trial rights, including the rights to access legal counsel before trial, to be brought promptly before a judge, to challenge the lawfulness of detention and to have adequate time and facilities to prepare a defence. There is a presumption of release pending trial and detainees are entitled to compensation if they are held unlawfully.

Under Article 48 of Iran’s amended Code of Criminal Procedures, which became law in April 2014, “an accused [person] can request the presence of a lawyer at the onset of detention”. However, according to the Note to the Article, if the accused has been detained on suspicion of committing certain offences including organized crime, crimes against national security, theft and drug-related offences, he or she will not be allowed access to a lawyer until up to a week after the arrest.