Numerous Executions of Sunni Prisoners in Iran, Continuation of the Ideology of Creators of Summer 1988 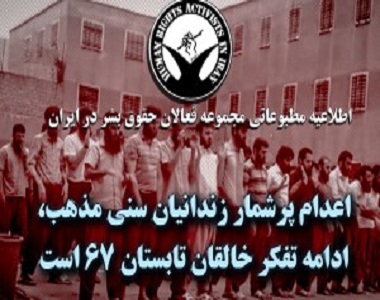 HRANA News Agency – Human Rights Activists in Iran (HRAI) condemns the mass execution of at least 20 Sunni prisoners in Rajai Shahr Prison. HRAI issued a statement in which it states that the victims were deprived of a fair trial and it also states that the consequences of executions of these prisoners will be harmful to the security and stability of the society. The full text of the statement follows:

Numerous Executions of Sunni Prisoners in Iran, Continuation of the Ideology of Creators of Summer 1988

On Monday, August 1, 2016, the prison guards dressed in black raid the cells of Rajai Shahr Prison in Karaj where the death row Sunni Prisoners were being kept, and their transfer by handcuffs, shackles and blindfolds to solitary confinements, was the beginning of a process that on the dawn of August 2,  2016, led to the mass execution of at least 20 of the 36 prisoners who were on death row in this ward of Rajai Shahr Prison.

Out of the 36 prisoners on death row, 29 had received the final judgement and their death sentences had been sent for implementation. The death sentences of the other 7 prisoners after being confirmed by the Lower Court, were under review by the Supreme Court.

Three decades after the massacre of the political prisoners in the summer of 1988 in Iran, the largest mass execution of the Political Prisoners was carried out while the rights of those executed were violated in many occasions, during detention and also during investigations while they were deprived of a fair trial.

Many of these prisoners had announced multiple times during detention, that their confessions had been extracted under torture and duress, and that they were deprived of having appointed lawyers and that without having a chance to defend themselves they had been sentenced to death during trials that were only a few minutes long.

In the chapter 8 of the new Islamic penal code, article 279, “MUhareb (enemy of god)” is defined as a person who has “taken up arms” in a way that has led to creating atmosphere of fear and has disrupted the public safety.

Some of the prisoners’ lawyers have announced that their clients had not taken up arms and based on the new Islamic penal code and that the law applies even to former crimes, they should have not been sentenced to death.

In the process of the implementation of these tragic executions even the most basic legal and ethical principles were not respected.  The lawyers were unaware of the execution of their clients, and the convicts were not given a chance to visit with their families for the last time, and their bereaved families were treated offensively and violently, and at the end, the bodies of those executed were buried by the security forces without obtaining any authority or permission from their families.

The judiciary and the security offices have not provided any clarification or information on these executions to the extent that the identity of those executed and the fate of those prisoners who have been transferred to solitary confinements are still unclear.

These mass executions took place, while just last year in 2015, by a large margin the Islamic Republic of Iran had ranked highest in the world for “killing its own civilians by death penalty”; these rankings were given based on per capita executions.

“Human rights Activists in Iran (HRAI)” with condemning these widespread executions and while expressing its condolences to the families of those executed, once again calls on the Iranian authorities and relevant institutions to fulfill their international obligations and to abide the concords they have accepted. HRAI as a human rights organization expresses its concern about the consequences of such executions which wounds and raises the sentiments of the ethnic and religious groups. To bring security and stability, HRAI calls for the revision on the sentences of other prisoners in similar conditions.  “Human right Activists in Iran” also calls on the international community and specially the Human Rights Council of the United Nations to not stay quiet about the executions of the dissidents and alleged security prisoners in Iran and to join the Iranian Human Rights defenders in calling on the Iranian authorities to end the violation of human rights.