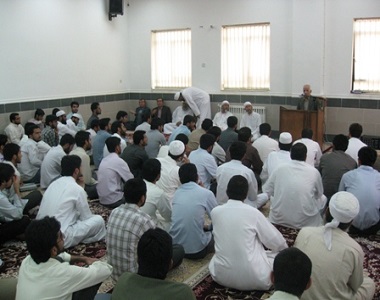 HRANA News Agency – The graduation ceremony for Sunni students at the Imam Shafi’i religious school in Kargan in Minab County, Hormozgan province, was cancelled following pressure from the Iranian authorities.

According to the report of Human Rights Activists News Agency (HRANA), the governor of Minab and the Ministry of Intelligence both ordered that the ceremony, due to take place tomorrow, should be cancelled.

A source told the Human Rights Activists News Agency (HRANA), “the reason for the cancellation of this gathering was that Molana Abdol Hameed, the Friday prayer Imam of Zahedan, and Sunni scholars from Baluchestan were invited to participate in this ceremony.”

“Despite previous authorization given to the school’s principal, Shaykh Ali Malahi, both the Ministry of Intelligence and the governor of Minab ordered the cancellation of the ceremony.”

In the small ceremony, eight female students were due to graduate after completing their religious studies course this year, along with graduates from the previous year. In total, only around 20 people were due to attend.

The news follows the arrest of five Sunni students in recent weeks from another Sunni religious school, the Imam Shafi’i school in Evaz, Fars province.