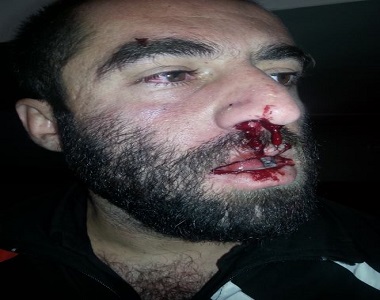 HRANA News Agency – Two Sunni prisoners of conscience awaiting execution in Iran, brothers Jamshed and Jahangir Dehghani, along with their family who were visiting them, were beaten by prison guards today in Rajai Shahr prison in Karaj, Iran.

According to the report of Human Rights Activists News Agency (HRANA), the attack took place today in the meeting room of the prison, where the family of the two prisoners had been allowed to meet them for the first time in months.

The family had originally been permitted to meet the men for 40 minutes, but after just ten minutes prison officers told the family that the meeting was over and that they had to leave.

According to eyewitnesses, after Sunni prisoner Jamshed Dehghani had complained about the order, prison officials as well as soldiers on duty in the prison began beating the men.

The family members of the prisoners, including the men’s two elderly parents, two sisters, as well as a young child, were also reportedly assaulted by the prison guards.

The men’s Sunni beliefs were also insulted. Witnesses reported that during the attack, one of the prison guards said, “these filthy Sunni guys should be hanged [executed] from the top of this meeting room”.