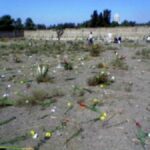 The following footage is a short illustrated report that gives the story of the burial site for some of the victims in the village of “Gaz Sharghi” of Bandar Gaz in Golestan province. The identity of those executed and buried in the yard of their homes in the video, are as follow: END_OF_DOCUMENT_TOKEN_TO_BE_REPLACED