Added Pressure on the Prisoners in Ardabil Prison 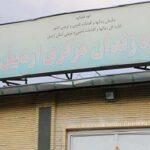 According to the report of Human Rights Activists News Agency in Iran (HRANA), the problems of the prisoners in the central prison of Ardabil and the unlawful behaviour of the prison authorities have been rising in recent months. END_OF_DOCUMENT_TOKEN_TO_BE_REPLACED