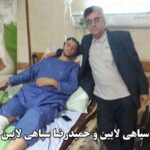 Human Rights Activists News Agency (HRANA)- As he had done for the past 20 years, Hamidreza Sepahi Layin was taking his sheep to graze from the border town of Dargaz, Razavi Khorasan province on September 19th, 2018. As Hamid’s brother Alireza explains, shepherds like Hamidreza often usher their herds across the plains and mountain grasses carpeting Iran’s northeastern borderlands with Turkmenistan. What happened next, however, was a break in routine.

That day, Layin, a 32-year-old father of two, had herded his flock about half of a mile into Turkmenistan territory when he caught sight of Majid Amiri, the head of the Sangdivar border guard post. Layin was familiar with the guard, and while crossing back to the Iranian side made his way over to greet him. When he was about 10 yards away from being able to reach out and give him a handshake, Amiri pulled out a gun and opened fire on Layin’s leg.

A friend and fellow shepherd had accompanied Layin that morning and procured a donkey to rush his wounded friend to the village clinic. As Layin slipped out of consciousness, profusely losing blood from two bullet wounds, Amiri blocked their passage for a full 40 minutes until Layin’s friend told him to either pull the gun on him, too, or let them go. Amiri let them pass.

Amiri’s plans to blame Turkmens for the shooting were upended by a Turkmen cohort who witnessed the incident from afar and reported it to authorities before him. Layin has undergone an operation to repair his bullet-shattered bone with metal plates.

Alireza Sepahi Layi, who is an author and journalist, wrote a note about his brother’s ordeal entitled “one bird with two stones,” excerpts of which have been translated into English by HRANA:

“We do have borders, in drought and abundance, war and peace, mourning and joy, solitude and company. For the past 500 years, we have used our bodies as shields, holding our ground, digging in our heels. With blood, sweat and tears, we quenched the thirst of our herds and irrigated our paddies and wheat fields. All of this to make sure that Russians, Uzbeks, and Turkmens don’t open their eyes one morning to find border villages like Sandiqal and Layin abandoned by Iranians; lest they believe those brave sentinels have tired of their duties and fled. I went to Dargaz today. No, I had not been summoned to court– not this time.  I’ve come many a time for trials or for prison to my hometown of Kalat-e Naderi. This time my destination was Dargaz, and my reason was to visit my brother who had been shot; a bird, shot with two stones. A man to whom fighting and brawls are unknown, who has never raised his shepherd’s crook, even to an ant. Thank God the bullets had the decency to strike only his shin. While they shattered his leg, they, fortunately, spared his life. The shooting took place during the Muharram ceremonies, on the eve of the anniversary of *Hussein’s death; and just as it was back then between Hussein and Yazid, a line in blood was drawn between the forces of good and evil. Javad Amiri, the head of Sangdivar border guard, pulled the trigger. He had just finished his officer training. He was probably sent for shooting practice to the border post, where the people have been defenseless for centuries, wielding only crooks of shepherding, shovels of gardening, and sickles of harvest. They have spread their generosity, kindness, and hospitality from **Hezarmasjed to ***Alborz and ****Zagros mountains…”

<b> * </b>     The third Shiite saint and Imam whose death in battle in the 7th century AD is a watershed moment in Shiite history commemorated each year in widespread rituals. Hussein represents the force of Good while the ruler he was fighting against, Yazid, symbolizes Evil.