An updated report on January protests in Iran 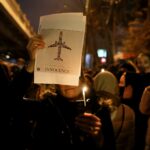