A juvenile prisoner is going to be executed 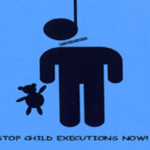 According to the report of Human Rights Activists News Agency (HRANA), a prisoner with the name of Bahaoddin Ghasemzadeh, who has committed murder on his juvenile, is now confronting with death penalty and likely to be executed, after reaching to legal age. END_OF_DOCUMENT_TOKEN_TO_BE_REPLACED