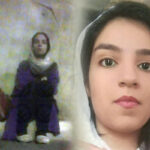 Human Rights Activists News Agency (HRANA) – Fatemeh Mohammadi, a Christian convert who was released from Evin Prison earlier this year, has staged a sit-in across from her former prison to protest what she referred to as the prison authorities’ “campaign of verbal harassment” against her.

Mohammadi was initially detained last November, and sentenced to six months in prison by Branch 26 of the Revolutionary Court of Tehran. She was released from Evin Prison’s women’s ward after completing her sentence. Now, she claims authorities are contacting her family to insult and harass them.

“After I was released from Evin Prison, I was contacted by the prison’s interrogation team,” Mohammadi told HRANA. “They called me all sorts of vulgar words. Last night, September 26th, 2018, Evin Prison again called my home. The person on the phone said [unpleasant] things to my family and told them, ‘It is best that you stop your daughter from her activities as the path she is on leads to corruption.’”

She said she was prompted to begin her protest when her home was contacted once again on Thursday, September 27th, 2018.

“They repeated their words,” Mohammadi said. “Afterwards, I went to Evin to find out what was wrong, but no one offered an explanation. For this reason, I am protesting and staging a sit-in across from Evin Prison, and will continue to do so until they process my complaint.”

Mohammadi previously published a letter in which she spoke of the anguish she endured during her interrogation.

Last November, Mohammadi was detained in Tehran and transferred to Evin prison along with Majid Reza Suzanchi Kashani, another recent Christian convert. On April 7th, 2018, Mohammadi, who was 19 years old at the time, was sentenced by Branch 26 of the Revolutionary Court of Tehran, presided by Judge Ahmadzadeh, to six months’ imprisonment on charges of “membership in proselytizing groups,” “christian activity,” and “acting against national security through propaganda against the regime.”

Per Iranian law, Mohammadi’s sentence should have been reduced by a quarter when she consented to the verdict; however, she served a month and a half longer than anticipated per the law. She was released May 14th, 2018. 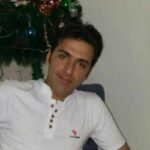 He was tried on April 25, 2018, along with Fatemeh Mohammadi for “Membership in Evangelical Groups and Evangelical Activities”, presided by Judge Ahmadzadeh. Mr Souzanchi was sentenced to five years in prison and Ms Mohammadi received a six-month prison sentence on charges of “Engaging in Evangelical activities” and “Acting against national security through propaganda against the regime”.

A source close to the defendants told HRANA that Mr Souzanchi suffered from broken ribs as a result of being beaten up twice during his interrogation by Intelligence Ministry agents. Souzanchi is also worried that his home was searched while he was in prison and some of his personal belongings and family photos were confiscated. He has written several letters [to the authorities] on the matter but has not received any response. In June, his prison cell was raided by agents who confiscated his personal belonging including a notebook in which he had written excerpts from the Bible.

Prison officials refer to Mr Souzanchi as “impure” and “Daeshi” (a member or ISIS). Mr Rostami, the Prosecutor’s representative, had told Mr Souzachi and Ms Mohammadi that “if we were in you Christians’ hands, you would have executed us”. Samad Hadipour, the investigator of Evin court’s Branch 3, referred to the church as a “casino”.

According to the Iranian Constitution, Christianity is a recognized religion. However, security apparatus in Iran are extremely sensitive toward Muslims converting to Christianity, and aggressively pursue evangelist activists.

Hassan Rouhani, Iranian President, during last year’s presidential election campaign stressed the importance of civil rights, and published a “Civil Rights Charter”. However, these promises have not been carried out.

Article 99 of the Charter states: “Citizens have the right to access facilities to participate in cultural life [of their choice], including the right to found associations, perform religious, cultural, and ethnic ceremonies as long as they respect the laws”.