CCTSI Rallies Teachers into Second Round of Strikes 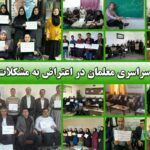