Juvenile Offender at the Risk of Imminent Execution in Iran: Amnesty International 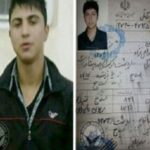 According to the report of Human Rights Activists News Agency in Iran (HRANA), Amnesty International called on the Iranian authorities to stop the death sentence of the juvenile offender, Himan Uraminejad whose verdict was confirmed by the Supreme Court. He has been informed that his sentence will be executed after April 1, 2016. END_OF_DOCUMENT_TOKEN_TO_BE_REPLACED