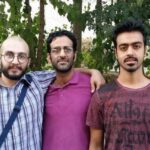 Branch 26 of Tehran’s Revolutionary Court sentenced Hirad Pirdaghi, Roham Yeganeh, and Farid Lotfabadi to imprisonment and lashes. According to this verdict, Hirad Pirdaghi was sentenced to six months imprisonment on the charge of “assembly and collusion”. Roham Yeganeh and Farid Lotfabadi were sentenced to six months imprisonment and 74 lashes which are suspended for four years. They were arrested on August 3, 2019, during the gathering of the families of detained workers of Haft Tappeh by Tehran’s Revolutionary Court building. The day after their arrest, they were transferred to ward 209 of Evin Prison. Their trial was on February 9, 2020. They were released on bail on August 27, 2019.

It should be noted that when Mr. Pirbodaghi went to Branch 7 of the prosecution office at Evin Prison on September 21, 2019, to pick up his personal belongings, he was rearrested because his bail was increased. On September 28, 2019, he was released on a 400 million Toman bail.