Sakhi Rigi Beginning the 8th Year of Imprisonment in Exile 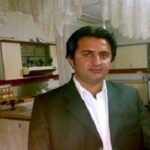 According to the report of Human Rights Activists News Agency (HRANA), Sakhi Rigi was arrested on June 18, 2009 in Zahedan city when he was 31 years old. He was tried with allegations like spreading lies and acting against the national security but the details of the court session have never been published. He was sentenced to 20 years in prison which is one the heaviest sentences that has been issued in Iran for bloggers. END_OF_DOCUMENT_TOKEN_TO_BE_REPLACED