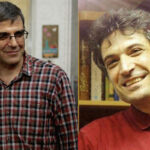 Since forcibly taking Meysami to the prison clinic on September 26th, prison authorities have kept him in quarantine-like conditions, restricting all of his contacts with the outside. In protest of his arrest, as well as authorities’ refusal to appoint the lawyer of his choice, Meysami has already been on hunger strike for more than 75 days.

Medical doctors, publishers, bookshop owners, and university graduates numbering 1400 in all have published an open letter raising their own concerns over Meysami’s condition and pleading for his immediate release. The voices of two teachers incarcerated at Evin also got behind what has become a burgeoning public campaign for, at the very least, Meysami’s transfer to an outside medical facility.

The full text of Khandan’s letter, translated into English by HRANA, is below:

It has been 75 days since Dr. Farhad Mesyami started his difficult and worrisome hunger strike. Three weeks ago, he was forcibly transferred to the prison clinic from the general ward. Reportedly on orders from the prosecutor’s office, and with the cooperation of the clinic’s director, prison officials have repurposed the clinic into a security detention unit where patient spaces can be used as solitary confinement cells.

Currently, Farhad Meysami is being held in one of those rooms under tight security controls. In his frail state he has reportedly been subjected to inhumane treatment whereby, against his will and without the presence of family or a lawyer, he was strapped to a bed and given injections.

In these instances, we must hold accountable not only judiciary authorities but also the Ministry of Health and the President himself, who has sworn to protect the rights of the people.

Moreover, we must advocate that medical professionals be held accountable, those who have in an unprofessional and unprincipled manner taken action against the will of the patient, heeding any and all orders [from authorities], however unethical they may be.

Farhad Meysami’s health and life is at risk now more than ever, and it is urgent he is transferred to a hospital outside the prison for medical care.

Reza Khandan Khandan was arrested in his home by security forces on September 4, 2018, before being charged in Branch 7 of the Evin Prosecutor’s Interrogation office. He was summoned to Branch 15 of the Revolutionary Court on October 5th but refused to attend as an act of protest against the unlawfully late subpoena.

Narges Mohammadi Back in Evin Prison after Hospitalization 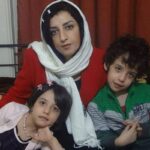 Human Rights Activists News Agency (HRANA) – Narges Mohammadi, imprisoned deputy head of Iran’s Center for Supporters of Human Rights who had been transferred to Imam Khomeini hospital on August 13th due to her grave health condition, has been sent back to Evin Prison.

Taqi Rahmani, Mohammadi’s husband, released a statement to announce his wife’s return to prison: “Narges needs sick leave to continue her treatment,” Rahmani wrote. “Yesterday, her children were waiting for their mother to call, and the call never came. She has the right to treatment.”

Mohammadi had previously been hospitalized on June 30th, and shortly after undergoing surgery was sent back to Evin on July 5th. On August 6th, prison authorities denied her transfer to see a neurological specialist outside the prison.

According to Mohammadi’s lawyer Mahmood Behzadirad, her requests for conditional medical release are consistently denied. Four years remain of the ten-year sentence she is currently serving.

Mohammadi was sentenced in Tehran’s Revolutionary Court in May 2016 to two concurrent imprisonments of ten and six years. Mohammadi reported that the trial judge displayed an openly hostile attitude toward her while endorsing the allegations of the Ministry of Intelligence. The ten-year sentence stemmed from a charge of “forming a society to disrupt national security,” for campaigning to end capital punishment in Iran. Her six-year sentence was for “organizing and colluding against national security” and “propaganda against the regime.”

Among the pieces of evidence used against her on the latter counts were her media interviews, participation in peaceful protests supporting prisoners on death row, her correspondence with fellow activists like Nobel Peace Laureate Shirin Ebadi, and her 2013 meeting with former European Union Foreign Policy Chief Catherine Ashton.

Branch 36 of Tehran’s Appeals Court confirmed Narges Mohammadi’s sentence in the Fall of 2016. In May 2017, Iran’s Supreme Court refused to appeal the decision.