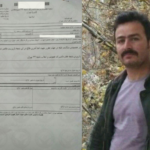 Rostamirad was arrested on July 2nd by plainclothes security forces in Tehran who did not present a warrant. His arrest was in connection with the Babak Fort gathering that occurred on the same day. After spending seven days in solitary confinement, he was sent to Ward 209 of Evin Prison and charged with “Propaganda against the regime”. He was released on bail on July 31st.

From the *Babak Fort arrests on July 2nd, Ebrahim Noori, an Azerbaijani Turkic minority rights activist, is the only one who remains in prison. He is held in Ward 209 of Evin Prison.

Rostamirad had previously been arrested on February 21, 2015, after taking part in a private meeting to commemorate International Mother Language Day.

*Babak Fort, a monument built during the pre-Islamic Sassanian period, is named after Babak Khorramdin, known for leading an uprising against the Abbasid caliphate in 893. In recent years, it has become a place of symbolic gatherings for Azerbaijani activists, especially during the annual commemorations in the first week of July.