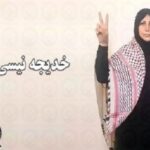 HRANA News Agency – Khadijeh Nisi was arrested by security forces after participating in the gathering of Ahwazi protesters to the events of the village of Jalisi Balla in the district of Dehloran in Ahwaz on Friday, December 8, 2017.

According to the report of Human Rights Activists News Agency in Iran (HRANA), the forces of the Ahvaz Intelligence Office arrested Khadijeh Nisi due to participating in the mass gathering of protesters against the events of the village of Jalizei Balla on Friday, December 8, 2017. END_OF_DOCUMENT_TOKEN_TO_BE_REPLACED