Violent Clashed Between the Civilians and Police in Asaluyeh 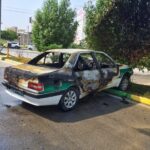 According to the report of Human Rights Activists News Agency in Iran (HRANA), on July 6, a young sailor named “Khalil Bagheri” was killed by Police in Bushehr. A group of angry people saw the incident and clashed with the police in front of the hospital in Asaluyeh during which a number of civilians were wounded, at least one police car was set on fire. END_OF_DOCUMENT_TOKEN_TO_BE_REPLACED