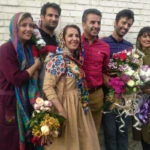 Human Rights Activists News Agency (HRANA) – Pezhman Shahriari and Mahboob Habibi, two Baha’i residents of Shiraz who were arrested by security forces on August 17th and detained in a Shiraz Intelligence Detention Center known as Plaque 100, have been released pending their court hearings.

As of the date of this report, no details were available about their charges.

HRANA previously reported on the coordinated arrests of Baha’i citizens Koroush Rouhani, Dorna Isma’ili, Hooman Ismaeili, and Negar Misaghian by Shiraz security forces. All were released later that day but Kourosh Rouhani, who was released on bail 37 days later.

Baha’is in Iran do not have freedom of religion. This systematic repression is in violation of Article 18 of the International Declaration of Human Rights as well as Article 18 of the International Covenant for Civil and Political Rights. These documents assert the rights of every individual to freedom of religion, religious conversion, and expression of their religious belief as individuals or groups, publicly or privately.