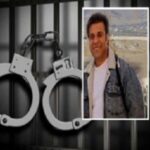 According to the report of Human Rights Activists News Agency in Iran (HRANA), Amirnozar Nouripour imprisoned in Evin prison, was released on a furlough which will lead to the end of his sentence. END_OF_DOCUMENT_TOKEN_TO_BE_REPLACED

Rajai Shahr Prison: 1 Political Prisoners Released, 2 Had to Return to the Ward

According to the report of Human Rights Activists in Iran (HRANA), On Tuesday 18th August, Kourosh Nasiri was released from prison, while Asadullah Hadi, who was sent to the hospital for further treatment, was returned back to the prison and Amanullah Mostaghim, who was outside the prison due to the suspension of his sentence, also was returned to Rajai Shahr prison, in Karaj. END_OF_DOCUMENT_TOKEN_TO_BE_REPLACED