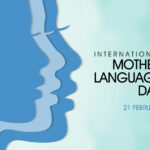 HRANA – Human Rights Activists (HRA) honors the International Mother Language Day, by bringing attention to the social and legal challenges that non-Persian language speaking, and diverse dialect linguistic activists face in Iran. Iran is a country of cultural and ethnic diversity, where diverse languages, dialects, and accents are spoken across the country. Despite almost half of Iran’s population speaking a language or dialect other than Persian, there is a growing trend of marginalization of non-Persian language and non-centralized dialects and accents, as well as a growing decline of overall linguistic diversity. Some of the main languages and dialects spoken in Iran are Turkic Azerbaijani (Azeri), Arabic, Balochi, Kurdish, Turkmen, Gilaki, Luri, and Mazandarani.

Two of the main systematic discriminations and challenges that non-Persian speaking individuals have been facing in Iran in the past year include deprivation from receiving an education in their mother tongue and challenges in officially naming their children with non-Persian names. Additionally, mother tongue activists are suppressed by the security apparatus and judiciary with the false allegations and labels, including but not limited to secessionists.

Deprivation from receiving primary education in the mother tongue

Despite the diversity of languages and dialects spoken across Iran, the education system promotes Persian hegemony and deprives many non-Persian speaking Iranians from receiving a primary education in their mother language.

In recent years, despite many objections, the ‘Persian Language Adequacy’ policy was implemented in parts of Iran. According to this plan children’s Persian language comprehension would be assessed and would act as an entrance exam to primary schools. The evaluation is carried out by the Elementary Education Department and Organization for the Education of Children with Special Needs and is added to an existing Health Assessment of pre-school children, which assess physical and cognitive development before entering schools.

‘Persian Language Adequacy’ policy specifically targets regions where the prevalent language is non-Persian, such as West and East Azerbaijan. A mother from Maku whose child has been through this test, told a HRANA reporter last year: “they told us to enroll your child you need to get approval from the ‘Persian Language Adequacy test’. After a 20-minute interview (with the child) they told me he has failed the test and you have to enroll him in the ‘School of Children with Special Needs;’ we objected the result of the assessment. They tested him one more time and this time he passed; nothing had changed but the person who carried out the assessment.” While emphasizing that this is a clear case of oppression of non-Persian speaking people in Iran, she added: “My son has no issues, he speaks fine, he can count, he even knows the alphabet, the only thing is that Persian is not his language. Imagine if we had not insisted for another assessment, he would have been deprived of attending regular schools forever.”

Civil society activists criticize the ‘Persian Language Adequacy’ plan, saying that the implementation of this plan is a violation of Article 15 of the Iranian Constitution which clearly states that while the official Language and writing script of Iran is Persian, the use of “regional and ethnic languages” in addition to Persian is permitted in schools for teaching of literature. Some other critics of this assessment consider it a cruel act of “Language Genocide”.

In March 2020, Branch 43 of the Court of Administrative Justice, following a complaint against the Ministry of Education by lawyer, Masoud Saliti , required the Ministry of Education to carry out its legal duty of compiling, printing, and distributing textbooks and teachings of “regional and ethnic literature” until the end of middle school. This action was to be done with respect to the characteristics of languages and context appropriate to the rural, nomadic, and urban life of each ethnic group.

Some mother language activists consider this ruling important. However, it should be noted that although this verdict was issued, no effective action has been taken to teach ethnic language and literature in Iranian schools.

Despite the promises of officials, especially Hassan Rouhani, during his presidential election campaigns, no concrete and fruitful effort has been made to implement this constitutional principle.

The international community recognizes the importance and necessity of mother tongue education as a fundamental human right and in several treaties and non-binding declarations, including Article 27 of the International Covenant on Civil and Political Rights, ratified by Iran in 1975, Article 30 of the Convention on the Rights of the Child, ratified in 1995, and The Declaration of the Rights of Persons Belonging to National, Ethnic, Religious and Linguistic Minorities,  adopted by the General Assembly in December of 1992 are among the international mechanisms which explicitly detail member states’ obligation to strengthen and teach the mother tongue of ethnicities and nationalities.

In some cases, civil registration offices refuse to issue identity cards to children on the pretext that the name is non-Persian. This has created many problems for children who are deprived of receiving timely identity documents. Among a myriad of other things, such a deprivation often leads to infants not receiving critical vaccinations.

The Civil Registry Office acts on the basis of a booklet prepared by the government which lists acceptable names and any name out of this booklet is considered “unathorized”. The political and religious restrictions imposed while compiling this book, effectively deprive many citizens of naming their children on the basis of their religious, ethnic or cultural identities in violation of human rights norms. This is a violation of Article 7.1, of the Convention on the Rights of the Child which states: “The child shall be registered immediately after birth and shall have the right from birth to a name, the right to acquire a nationality and as far as possible, the right to know and be cared for by his or her parents.”

In the past 12 months, at least 6 children have been deprived of receiving Identification documents because the of the non-Persian name under which the child was registered. There has been graffiti spotted on walls protesting this act. The below picture reads:

Picture 1; “Children’s names, are not all in one language”

The photo below reads: “Ayil, A political concept.” The phrase was written for the child of Sajjad Jolani, an Azeri Activist who wanted to name his daughter “Ayil” meaning “Awakening” in the Azeri language. The name was rejected for identity registration. Jolani has been told he must choose another name. According to the civil registration of Ardabil Region 1, all civil registration names must be approved by 3 Persian language teachers. As a result, the child is left without registration entering her 7th month.

Ayil appears to have become a symbol for all the Turkic (Azerbaijani) children who have been rejected registrations. The below phrases document the visual protests to such discriminations, they read: “He will remain Ayil” (photo 3), “I am not afraid of Ayil (awakening)” (no picture included). 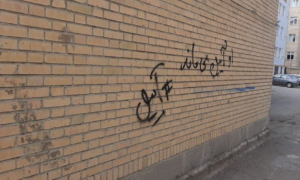 There are many other parents who struggle to register their children with a chosen name in their mother language. Additional examples of names that have been recently rejected registration are: Aanar, meaning wise, Seougi, meaning love, Atakan, and Yaqish. Some of these children are in their 2nd and 3rd year of life still being rejected registration under their given names.

Security apparatus and judiciary oppression of the Mother language activists

Mother language activists face oppression by the judiciary and security apparatus and are often given labels which accuse them, for example, as being secessionists. Many of them are arrested and imprisoned under arbitrary charges of “propaganda against the regime” and “disturbing national security”.

Zahra Mohammadi, Kurdish activist from Sanandaj city was originally sentenced to 10 years of imprisonment for activities regarding teaching in the Kurdish language. This sentence was reduced to 5 years of imprisonment by the appeal court. This sentence was issued by the Fourth Branch of the Court of Appeals of Kurdistan Province, presided over by Judge Mostafa Tayari. Ms. Mohammadi is a member of the Nojin Cultural Association, which works to preserve the environment of Kurdistan, contain fires in the province’s forests and pastures, and teaches Kurdish language. More than 38 Kurdish NGO’s have signed a joint letter to Hassan Rohani, Iran’s President, protesting the 10-year prison sentence.

In part, the letter reads: “If today Zahra Mohammadi, a Kurdish language volunteer teacher, is sentenced to ten years in prison, it is a clear sign of distancing from the rights of (non-Persian) language societies. Us the signatories to this letter, as part of Kurdish civil society activists, protest this ruling, and this protest is a protest to the continued exclusion of Iranian languages from the Iranian education system and considering the language issue a security issue. Our request is your attempt to take the language issue out of the scope of national security issues, to pursue the issue of Zahra Mohammadi’s imprisonment and to take steps towards the realization of the language rights of the Iranian (non-Persian) language societies.”

On Saturday, Feb 20, 2021, a number of civil activists in Sanandaj held a protest in front of the city’s judiciary to condemn the 5 year prison sentence of Zahra Mohammadi.

Fatemeh Tamimi and Maryam Ameri were arrested by security forces on Wednesday, December 9, 2020, and taken to an unknown location. According to an informed source, the two together collected stories, lullabies and songs in Arabic to record oral history from village to village.

Charges for one of the above defendants include:

Amir Amini was arrested by security forces in Tehran on Feb 21st, 2019, during the street activism in honor International Mother Language Day. In July 2019, he was sentenced by Branch 26 of the Revolutionary Court of Tehran to a total of 9 years in prison on charges of “conspiracy to disrupt national security and propaganda against the regime.” This sentence was reduced to 7 years and 6 months of imprisonment in the appeal stage. Which according to a new law, “serving the longest sentence” 5 years of this sentence are required to be carried out.

Kianoosh Aslani was arrested by security forces in Tehran on 21st February 1997, during activism on street for International Mother Language Day. He was sentenced to 5 years in prison by Branch 36 of the Court of Appeals of Tehran Province in February 2020 on charges of “conspiracy to disrupt national security.”

Despite all the oppression and difficulties mother language activist continue to fight for the protection of diversity of languages as well as demarginalization of non-domiant-Persian languages and dialects. As the International Mother language day approached many graffities in various languages popped up on the walls and streets of Iran. Many of these are written in non-Persian languages. In the City of Tabriz, the mouth of statues were symbolically taped. Some Turkic Azeri language activists have published Azeri textbooks and distributed them to the children of cities of Ardabil, Meshkin, and Urmia. 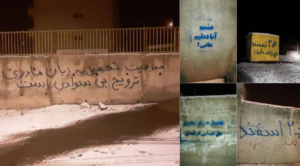 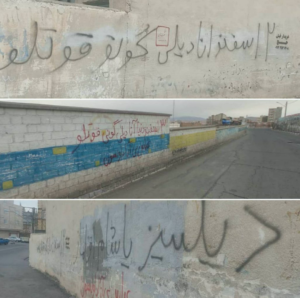 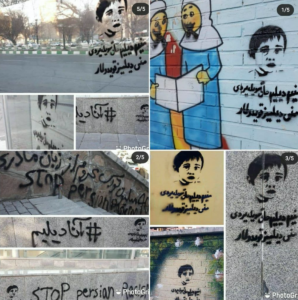 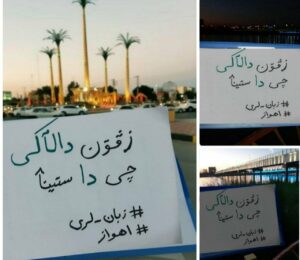 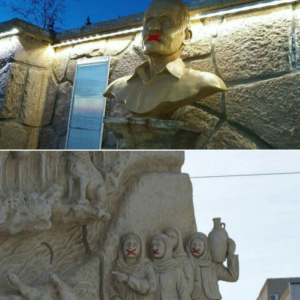 On Saturday, Feb 20, 2021, on the eve of International Mother Language Day, a number of Azerbaijani civil activists distributed educational books in the Turkic (Azeri) language throughout the city of Urmia. 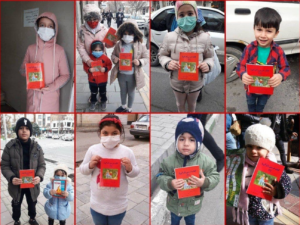 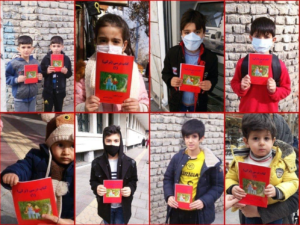 At the same time, civil activists in Ardabil province distributed educational books in Turkic (Azeri) language in the cities of Ardabil and Meshkin. 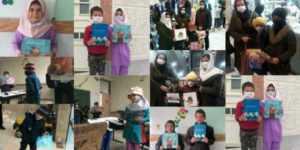