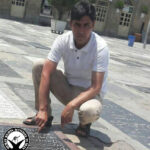 Kamrani’s medical practice was raided by security forces who seized his computer, laptop, books, and other personal belongings. He was then sent home under tight security controls and interrogated for three hours in front of his children.

Neighbors were reportedly assaulted when they protested the presence of plainclothes and security agents around the perimeter of Kamrani’s house.

After the interrogation, Kamrani was sent to an undisclosed location. His whereabouts and the charges against him have yet to be confirmed.

Kamrani was previously arrested for taking part in street protests against the TV show “Fetileh,” believed by many to have portrayed Azerbaijanis in a derogatory light.