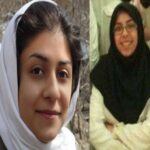 According to the report of Human Rights Activists News Agency (HRANA), Iranian Revolutionary Guards Intelligence arrested a number of women’s rights activists. Zahra Khandan, journalist and former student activist from Amir Kabir University (Tehran Polytechnic) and Soha Mortazaei, other practitioners in the field, are two of these detainees who were arrested in Tehran at their homes. END_OF_DOCUMENT_TOKEN_TO_BE_REPLACED