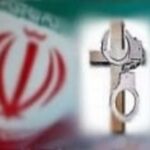 According to the report of Human Rights Activists News Agency in Iran (HRANA), while a funeral was held at part 300 of Beheaht-e-Zahra on September 10, 2017, Mehrdad Houshmand and his wife Sarah Nemati participated as Christians in the ceremony. END_OF_DOCUMENT_TOKEN_TO_BE_REPLACED