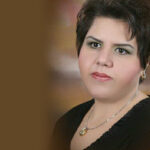 HRANA reported September 22nd on Haghighi’s transfer to Bandar Abbas Prison to serve her six-month sentence for “propaganda against the regime.”

Haghighi was first arrested by intelligence agents in her home on February 19, 2017. For a week after her arrest, she was held in solitary confinement in the city’s intelligence office before being transferred to the Women’s Ward of Bandar Abbas Prison. She was sent to Ward 209 of Evin Prison on April 12, 2017, where she stayed until being released on bail May 28th, 2017.

Human Rights Activists News Agency (HRANA) – Mehrnaz Haghighi, a civil rights activist and doctor from Bandar Abbas on the Persian Gulf coast, presented herself to the enforcement department of the Hormozgan Judiciary on Saturday, September 22nd, in order to serve her sentence. She was transferred to Bandar Abbas Prison later that day.

Haghighi was previously sentenced to six months in prison on a charge of “propaganda against the regime.” She was first arrested by intelligence agents in her home on February 19, 2017.

After being held in solitary confinement for a week, she was transferred to the women’s ward of Bandar Abbas Prison, located in the detention center of the city’s intelligence office. Haghighi was then transferred to Ward 209 of Evin Prison on April 12, 2017, before finally being released on bail from Evin on May 28th, 2017.

As of the date of this report, no further details were available on her case.