Five Citizens in Tehran Were Sentenced to 370 Lashes, Combined 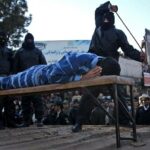