Shahnaz Akmali Released on the Bail 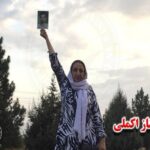 HRANA News Agency – Shahnaz Akmali, Mostafa Karimbaigi’s mother, whose son was one of the victims of aftermath of presidential election of 2009 who was released on the bail temporarily from Evin prison.

According to the report of Human Rights Activists News Agency (HRANA), Shahnaz Akmali was released temporarily on a bail of 1 billion IRR from ward 209 of Evin prison, on February 18. END_OF_DOCUMENT_TOKEN_TO_BE_REPLACED