A Daily Overview of Human Rights Violations in Iran for January 20, 2019

The following is an overview of human rights violations in Iran on January 20th, 2019 based on the information compiled and verified by Human Rights Activists News Agency (HRANA).

(1) Sepideh Gholian was arrested earlier today. She reacted to last night’s broadcast of her forced confessions on the national television and requested a public trial. She is a social rights’ activist and was released on bail on December 18th. She was arrested on November 18th while she was supporting the strike of the Haft Tappeh Sugarcane workers.

(2) A Baha’i citizen, Atousa Ahmadaei, was arrested earlier today in Tehran and was transferred to an unknown place. The intelligent officers also searched her home and confiscated her belongings indicating that her charge is “acting against the national security’.

(3) A Telegram activist, Mohammad Mehdi Zamanzadeh, was released from prison after completing two and a half years sentence for blasphemy-related charges.

(4) Two Kulbars (Kurdish back carriers), Karim Faraji and Masoud Ahmadzadeh, were injured after fell falling off a mountain in Sardasht and Baneh.

(5) Mohammad Saleh Shokri was acquitted of “cooperation with a Kurdish opposition group” in Saqqez while Majid Tibash was released on bail on the same charge in Urmia. Five other people, Ali Esmaeili, Oman Hasani, Hassan Mousavi, Abdollah Advai, Osman Hosseini, Jamal Mousavi and Arshia Maleki have been arrested on the same charge in Oshnavieh, Sarvabad and Kermanshah.

(6) A 23-year-old resident of Ahvaz, Ali Ayashi, was arrested by the security forces. His whereabouts is still unknown.

(7) Yaser Mohebi and Ghader Zini have been arrested in Kermanshah and Urmia on the charge of “cooperation with Kurdish opposition group”. Mohebi was arrested last year after having a speech in support of Baha’i citizens.

(8) Historian and documentary producer, Hossein Dehbashi, was sentenced to four months imprisonment on the charge of “disturbing the public mind” for the complaint filed by Ministry of Health and Medical Education’s. According to Hrana, Dehbashi rose to modest fame after producing a promotional documentary for 2013 presidential candidate Hassan Rouhani, as well as the documentary “The Royal Court’s Narrative.” In 2015, he directed and launched the Iran Verbal History Project through the National Library and Documentation Center [thousands of YouTube viewers have screened clips of Dehbashi’s work, which features interviews with key political figures from the past four decades.

(9) The families of two detained Arab citizens, Ghasem Beit Abdollah and Abdollah Karmalacheab who received death penalty for ‘acting against the national security’ and were transferred to the Evin prison, have expressed their concern for their execution date approaching.

(10) A prisoner on the death row was saved from execution by the consent of the next of kin in the Fars province. There have been 31 similar cases in the last 11 months. There were seven other savings from execution in the Yazd province in the same period

(11) Workers of Aleshtar city services in Lorestan province have unpaid wages. Also, the Ports and Marine Organization owes the insurance share to its workers.

(12) The release on bail for the two detained labor activists, Behnam Ebrahimzadeh and Arsham Rezaei is postponed. Also, Rezaei and two others in the same case Mohammad Hosseinzadeh, and Majid Hosseini, were transferred to quarantine in the Evin prison although their bonds were set.

(13) Sunni elites and professors in Sistan and Baluchestan wrote an open letter to the president, Hassan Rouhani, to protest the discrimination and not using Sunni’s elites’ consultation in this province.

(14) A man who assaulted the cashier of a restaurant, has received an alternate sentence to foster street Children for six months by the court of Shiraz.

(15) More than seven protests were organized in Iran on January 20, 2019. The clients of SAIPA and IranKhodro in Tehran, the contractors of Tehran municipality, Ahvaz inter-city rail workers, the workers of city services in Borujerd, the investors in Padideh Shandiz in Tehran, the applicants of Islamic Azad Medical University in Tehran, and the workers of Lowshan municipality held separate protests to demand their requests.

A Daily Overview of Human Rights Violations in Iran for December 24, 2018

The following is an overview of human rights violations in Iran on December 24th, 2018 based on the information compiled and verified by Human Rights Activists News Agency (HRANA).

(1) More than five protests were held in Iran; shareholders of the bankrupt financial institute of Caspian, workers of Tabriz Ball Bearing Manufacturer, farmers of Varzaneh in Isfahan, workers of Ahvaz Intercity Railway Company, workers of Andimeshk Arya Steel Company, and families of the detained workers of National Steel Company of Ahvaz.

(2) A teacher’s union activist, Mohammad Habibi ‘s sentence of ten years and a half in prison was confirmed in an appeal court. His sentence also included prohibition of social and political activities for two years, a travel ban for two years, and 74 lashes.

(4) Raheleh Rahemipour’s appeal court will be in session next month. She has been accused of ‘propaganda against the state’ because of writing a letter to the UN, demanding whereabouts of her executed brother and her disappeared nephew.

(5) Houshang Rezaei’s appeal court was on session after he spent 9 years in prison. He has been on the death row for 9 years being accused of Moharabeh through membership in Komele [Kurdish opposition group].

(6) Mohammad Saber Malek Reisi and Shir Ahmad Shirani who had been transferred to an unknown place, returned to the Ardabil prison.

(7) The Iranian parliament has failed to muster enough votes to approve “child bride” bill. This bill aims to set the legal age of marriage at 16 for girls and at 18 for boys.

(8) Ali Nejati, a labor activist, who is a member of Haft Tappeh Sugarcane Mill Labor Syndicate, has been transferred to Shush prison. He suffers from heart disease.

(10) Four detained political activists, Abdollah and Mohammad Hossein Ghasempour, Alireza Habibian, and Akbar Dalir have been deprived from the right to an attorney in the last seven months.

(12) In the last eight months, 291 workers died of work-related incidents which is an increase of 11 percent from last year.

(13) Two detained activists, Musa Mahmoudi and Mohammad Ebrahimi who were charged with ‘cooperation with Kurdish opposition groups’ were sentenced to 4- and 15-years confinement respectively. They are from Piranshahr and Oshnavieh.

(14) A worker was injured in an unsafe factory in Nishabur city in Khorasan Razavi province.

(15) Ahmad Rastegari was sentenced to 6 years imprisonment in Urmia prison. He is accused of ‘membership in a Kurdish opposition groups’ and ‘propaganda against the state’ and was sentenced by Branch 2 of the Urmia Revolutionary Court.

(16) A prisoner charged with murder was saved from execution with forgiveness of the next of kin in the Kermanshah province.

(17) In the Mashhad Central Prison, a man was saved from hand amputation after his plaintiff forgave him.

(18) Marivan firefighters and the workers of Karaj municipality have 3 months of unpaid wages. 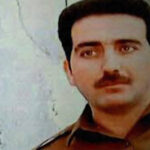 Human Rights Activists News Agency (HRANA) – Supreme Court Branch 47 has upheld the death sentence for Urmia prisoner Hedayat Abdollahpour, one of several defendants charged in connection to the Oshnavieh clashes, his lawyer Hossein Ahmadiniaz told HRANA. It also upheld the prison sentences of six of Abdollahpour’s co-defendants, who are currently free on bail.

Ahmadiniaz and Abdollapour’s family learned yesterday October 8th of the high court’s assent to his January 2017 capital punishment sentence in Urmia Revolutionary Court Branch 1, on a charge of “Baqi,” i.e. rebellion [often used against those accused of participating in armed uprisings]. Abdollapour maintains that he never took up arms and did not have a weapon at the time of his arrest.

Abdollahpour was arrested along with six others on June 15, 2016, in Qarah Soqol village near the city of Oshnavieh. His case was initially toggled from one court to another: charges were first ruled in initial court, reversed in supreme court, and then sent back to the parallel court branch that ultimately decided his fate.

Ahmadniaz told HRANA that his client was guilty simply of having been in the wrong place at the wrong time. “Hedayat Abdollahpour is being processed on something he knows nothing about, and towards which he would have no inclination,” Ahmadniaz said. “These honorable plaintiffs — the Islamic Revolutionary Guard Corps (IRGC) — want to put him to death for Baqi.”

The Oshnavieh clashes were fights that broke out between the Kurdistan Democratic Party of Iran and the Iranian Revolutionary Guard Corps of Hamzeh in the summer of 2016. Many from both sides were wounded or lost their lives in the conflicts.

Many of those residing in the border region of Oshnavieh were arrested and convicted on suspicions of collaborating wwith the Kurdish opposition.

Abdollahpour’s brother Farhad was arrested by IRGC Intelligence forces June 30th of this year and taken to IRGC detention center in Urmia. He was transferred to Oshnavieh Prison September 13th and later released on a bail of 2 billion rials [approximately $20,000 USD]. 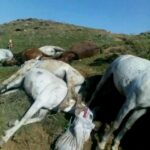 According to the Report of Human Rights Activists News Agency (HRANA), a number of Kulbars were stopped and arrested by the border guards affiliated to the IRGC in the border region of Oshnavieh. The armed forces after arresting these people shot their animals to death. END_OF_DOCUMENT_TOKEN_TO_BE_REPLACED