A 3-Year-Old Child Killed by Security Forces in Ahvaz 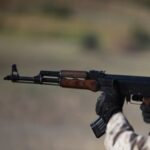 According to the report of Human Rights Activists News Agency in Iran (HRANA), by the security forces’ direct shot at a vehicle carrying a family, a three-year girl named “Raghad Savari”, daughter of Abbas was killed instantly and her mother was seriously injured, on October 24. END_OF_DOCUMENT_TOKEN_TO_BE_REPLACED