Baha’i Student Expelled from University for Her Religious Beliefs 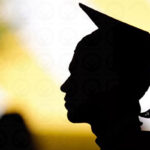