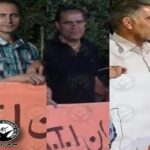 HRANA News Agency – Three labour activists in Fars province were arrested by the security forces in Shiraz. There is no information about these activists’ situation and whereabouts.

According the report of Human Rights Activists News Agency in Iran (HRANA), Shahab Karin Aghaei, Jafar Pazhoheshpour, and Hossein Esmaeili were arrested in front of Job Centre Department of Fars province, by the plainclothes agents, on Wednesday February 8, 2017. END_OF_DOCUMENT_TOKEN_TO_BE_REPLACED