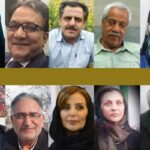 A letter signed by 14 civil rights activists was published in July-August of 2019 demanding resignation of Ayatollah Khamenei. After this letter was published, some of the signees were arrested and some were under pressure. Currently, Abdolrasoul Mortazavi, Mohammad Hossein Sepehri, Mohammad Nourizad, Javad Laal Mohammadi, Seyed Hashem Khastar, and Fatemeh Sepehri who signed this letter are still in detention and some were released on bail.

On February 1, 2020, eight arrestees who signed the letter requesting Ayatollah Khamenei’s resignation, were sentenced to a total of 90 years imprisonment, six years ban from leaving the country, and six years of exile by Branch 4 of Mashhad’s Revolutionary Court. Their detailed sentences are as the following:

Hashem Rajai, Morteza Ghasemi, and Mohammad Hosseinpour: each was sentenced to a one-year prison term

In addition, Javad Laal Mohammadi was sentenced to 9 years of imprisonment on February 4, 2019.

Moreover, on February 5, 2020, Mohammad Mahdavifar, civil rights activist and a signee of the letter was sentenced to 9 years in prison by Branch 102 of the Penal Court 2 Aran and Bidgol.

These sentences were issued for the charges of “establishing an unlawful group and propaganda against the state”. The sentences for “insulting the Supreme Leader and the Founder of the Islamic Republic” are still in process.

On February 3, 2020, Abdolrasoul Mortazavi and on February 4, Javad Laal Mohammadi were arrested.

It should be noted that they were arrested together on August 11, 2019, in front of a courthouse in Mashhad.

Eventually, Shahla Jahanbin on November 13, Shahla Entesari on November 10, and Giti Pourfazel on November 13 were each temporarily released on a 500 million Toman bail before completion of the prosecution from Evin Prison.

Four civil rights activists, Shahla Jahanbin, Zahra Jamali, Giti Pourfazel, and Shahla Entesari, who wrote an open letter in summer of 2019 and requested Ayatollah Khamenei’s resignation, were sentenced each to six years imprisonment by the Revolutionary Court for the charges of “assembly and collusion against the national security” and “propaganda against the state”.

Among them, Ms. Giti Pourfazel who is an attorney and a member of the Iranian Writers’ Association, was also sentenced to two years ban from membership in parties and social/political groups.