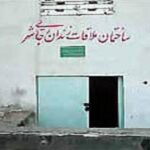 HRANA News Agency – Some of the political prisoner of Rajaei Shahr in Karaj, whose siblings or other family members are imprisoned, too have monthly visits with them. But they were deprived of it for the second time, because of their refusal from wearing prison uniform and being in handcuffs and shackles.

According to the report of Human Rights Activists News Agency (HRANA), on November 24, five political prisoners in Rajaei Shahr were deprived of having visits with their family members, due to their refusal from wearing prison’s uniform. END_OF_DOCUMENT_TOKEN_TO_BE_REPLACED

Political Prisoners Prevented from Visiting Their Other Imprisoned Family Members

HRANA News Agency – Some of the political prisoners of Rajaei Shahr prison whose wives or other family members are also imprisoned, because of obligatory prison uniform and appearing with handcuffs and shackles, refused to have prisoner visits.

According to the report of Human Rights Activists News Agency (HRANA), 5 political prisoners of Rajaei Shahr prison of Karaj, refused to visit their family members who are also imprisoned, due to the obligatory prison uniform, handcuffs and shackles on October 25. END_OF_DOCUMENT_TOKEN_TO_BE_REPLACED