After attempting suicide; A report on the latest situation of Siamak Moghimi in Great Tehran Penitentiary 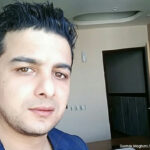 HRANA – Siamak Moghimi, Political Prisoner imprisoned at Great Tehran Penitentiary who was arrested during the nationwide November 2019 Movements was transferred from quarantine to the public ward, today Monday March 15, 2021. Earlier on Wednesday 24th February 2021, Siamak Moghimi had attempted Suicide by Cutting his Wrist and abdomen. Although he was saved from bleeding and dying after being sent to the hospital where he recieved numerous internal and external sutures, yet he spent the last 18 days in prison quarantine in poor conditions. Despite suffering from a mental illness and a long hospital stay before his arrest, with the negligence of Authorities Mr. Moghimi is still serving his sentence in Great Tehran Penitentiary.

According to Human Rights Activists News Agency (HRANA), Today Monday March 15, 2021, Siamak Moghimi, Political Prisoner imprisoned at Great Tehran Penitentiary who was arrested during the nationwide November 2019 Movements was transferred from quarantine to the public ward.

According to a source close to Mr. Moghimi’s Family, despite that the wrist and abodman of Mr. Moghimi had received multiple internal and external sutures after his attempted suicide, yet he has been transferred from hospital to the Quarantine Ward of Great Tehran Penitentiary, and without any facilities and medical care he has been imprisoned in harsh conditions. It is said that Mirza-Aghai the head of a division, has not signed his papers and therefore he has been kept in the quarantine.

It is said that since Mr. Mirza-Aghaei, the head of the division 9 and 10 of the Great Tehran Prison, took office, every administrative correspondence of the prisoners lasts for 20 days. This used to be done on a daily basis.

Siamak Moghimi was taken to the hospital late night on Wednesday, 24th February, following a suicide attempt by cutting his wrist and abdomen. Despite Mr. Moghimi suffering from a mental illness and his long hospitalization before his arrest, yet by the negligence of the authorities, he is still serving his sentence in the Greater Tehran Prison.

According to an informed source, Mr. Moghimi had attempted suicide being influenced by Mirza-Aghai’s Words, who had told those arrested in relation to November 2019 protests “you have no rights”. By forming a disciplinary council in the prison and disciplinary cases for these prisoners, Prison officials are threatening them with deprivation from furlough, and Not being entitled to parole. This action has created additional psychological problems for some prisoners.

Siamak Moghimi was arrested by the agents of Sarallah Base of the Islamic Revolutionary Guards (IRGC) during the November 2019 protests in Parand city and was transferred to the detention center of this organization. After the interrogation process, he was transferred to Great Tehran Prison.

Mr. Moghimi’s charges were delivered to him at Parand, and after his case was sent to the 24th Branch of the Revolutionary Court of Tehran headed by Judge Amouzadeh, he received 10 years of imprisonment for charges such as “gathering and collusion”, “propaganda against the regime”, “insulting the supreme leader”, and “insulting the president”.  According to Article 134 of the Islamic Penal Code, the most severe punishment, i.e. 5 years in prison, will be applicable to him.

Mr. Moghimi had previously on 25th January 2020, had attempted suicide after coming to know of the verdict of 10 years of imprisonment for him.

The arrest, conviction, and continuation of Mr. Moghimi’s detention took place while, a week before his detention he was hospitalized for a long time in a psychiatric hospital, and his imprisonment exacerbated his condition.

It should be noted that the November protests are a series of nationwide protests that began on Friday, November 15, 2019, with the announcement of an unprecedented increase in gas prices in dozens of cities in Iran with the unprecedented presence of protesters in the streets which continued for several days. Mohammad Javad Koulivand, a Karaj MP, said the protests took place in 719 locations across the country. Seyyed Hossein Naghavi Hosseini, the then spokesman of the National Security and Foreign Policy Commission of the parliament, also announced that the number of detainees in the protests was about 7,000. And according to various human rights groups, hundreds of people were killed during these protests.