International Day of Education; an overview of the right to education in Iran in 2020 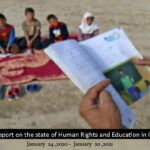 Hrana- This report prepared by Human Rights Activists (HRA) honors the International Day of Education by bringing attention to the state of education in Iran, specially during the Covid-19 pandemic and consequent challenges of online education. Furthermore, this report includes a statistical overview of the violations of the fundamental rights of students and teachers, as well as violations of the right to education that took place between 24th January 2020 to 20th January 2021 in Iran.

The right to education is a fundamental right that should be available to everyone free of charge, at least for children in the elementary and fundamental stages. However, many students in Iran have been deprived of their right to education due to the lack of facilities and educational spaces, and dilapidated schools. According to managing director of Society for Protecting the Rights of the Children (SPRC), there are approximately 1 million children living in underdeveloped or in impoverished neighbourhoods in Iran, who are deprived of education. Also 49 thousand children do not attend schools because they lack documents such as birth certificate or are active part of the workforce. This statistic does not fluctuate greatly each year however, during the Covid-19 pandemic there has been approximately a three-fold increase in the number of children deprived of basic education, due to lack of proper infrastructure for online education and a sudden shift from classrooms to online schools during the pandemic.

In the university level, in addition to many systematic challenges for getting into universities, many students have been banned from attending higher education due to their religious belief. Students that believe in Baha’i faith are amongst those that are often deprived of either entering universities or completing their university degrees. In addition, on banning students from completing their higher education in Iranian Universities, many teachers and students or individuals that have any connection to the Baha’i Institute for Higher Education (BIHE) have also been arrested and given long prison terms.

Many student and teachers have also been arrested, suspended, expelled, or reprimanded for expressing their thoughts and opinions or for holding peaceful assemblies and publications. 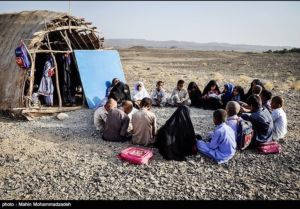 Access to basic and primary education has not been equal for all because of various factors, including lack of infrastructure, lack of access for undocumented children, poverty, and cultural and language discriminations. According to the managing director of Society for Protecting the Rights of the Children (SPRC), there are approximately 1 million children living in underdeveloped or in impoverished neighbourhoods in Iran, who are deprived of education. Additionally, 49 thousand children do not attend schools because they lack identification documents such as birth certificate or are part of the workforce.

This statistic does not fluctuate greatly each year however, during the Covid-19 pandemic due to lack of proper infrastructure for online education and a sudden shift from classrooms to online schools across the country, there has been approximately a three-fold increase in the number of children deprived of basic education. According to Minister of Education 3 million and 225 thousand children are deprived of education because of lack of access to internet or devices such as smart phones, tablets and computers. 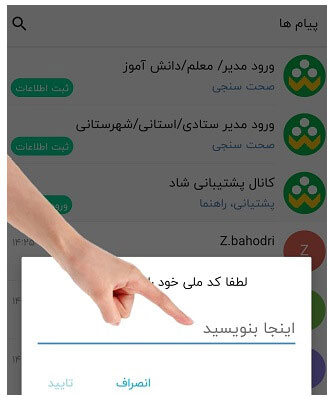 With the outbreak of the covid-19 virus and the closure of schools, Education Ministry announced that it would resume educating students via the Internet and using a platform called ‘Shad’. The online platform, which requires Internet, has been criticized by teachers and civil society activists from the beginning of its announcement. The problems of online education in Iran and sudden closure of schools without providing any significant support to deprived students includes, lack of access to reliable internet in many parts of the country specially in rural areas, and lack of financial ability of students and their families to purchase necessary devices such as smart phones for this type of education .

Undocumented children: Another major discriminatory aspect of ‘Shad’ platform is that it requires students to register with their national identification number, which leaves undocumented children without access to primary and basic education.

Children in rural areas: There are also reports from various areas of the country that with lack of proper internet connection children have to climb to high points near their cities to be able to connect to internet and the Shad platform to attend classes.

Considering these statistics, almost half of the population of the country are living in conditions that makes online-education inaccessible for them. 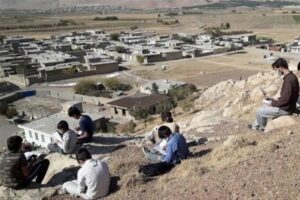 Higher education in Iran has limited sits available through a national examination system, where all students who wish to enter university have to pass this exam to enter into universities. Based on participants rank in this exam students will be placed into universities and majors of their choices. This exam is highly competitive and often students do not get accepted into their chosen university or majors. In recent years Supreme Leaders office had announced lower sits available to female students, however female students continue to take up more than half of university sits by higher acceptance rate compared to male students. According to the head of Sanjesh institute responsible for carrying out the national university entrance exam (operating under Ministry of Science, Research and Technology), in 2020, 101 thousand and 912 women passed the national university entrance examination that is 53.6% of all the those who registered. 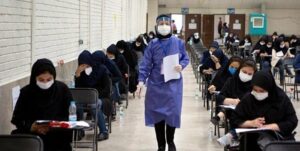 Methodology: The following statistics have been gathered and prepared by the statistic department of Human Rights Activists (HRA). These statistics consist of aggregation of data from HRA’s exclusive reports and documentation efforts, as well as data gathered from public sources. All the gathered information are fact checked to assure their authentication. This data is not exhaustive as many information and statistics are not available or HRA has not been able to verify their authenticity. However, this is a comprehensive report of the available data that HRA has been able to verify.

In the one-year period, between January 24, 2020 to January 20, 2021, 7 students were arrested, 3 student’s homes were raided by authorities and their personal belongings were confiscated, and 11 student activists were sentenced to a total of 512 months of imprisonment and 222 floggings.

Violation of the Right to Education: 23 Baha’i students were deprived of continuing their education because of their faith.

Violation of the Right to Freedom of Expression and Peaceful Assembly: 20 students of the Mohaghegh University of Ardabil were reprimanded and suspended from university for gathering and attending the memorial of the victims of flight #PS752 tragedy.

Additionally The student publication of ‘Zed va Forough’ was shut down by authorities.

There has been reports of injuries resulting from the neglect and lack of proper infrastructure at universities and student residencies. On 28th January 2020, 4 students were taken to medical facilities after being poisoned by a methane gas leak from a sewage well at the Buein Zahra Technical University (BZTE) of Qazvin.

In this reporting period 21 student protests took place across the country.

In the period of one year between January 24, 2020 to January 20, 2021, 3 teachers were arrested, 13 teachers were sentenced to a total of 334 months of imprisonment, 45 floggings and twelve million and hundred Toman in fines.
On August 10, 2020, a teacher at Jared and Balade a part of Kazeroun city of Fars Province committed suicide by drinking poison and lost his life. The reason behind his suicide has been attributed to failing the adult literacy exam.