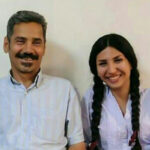 A group of political and civil rights activists visited Mr Soltani’s home to convey their condolences to him and his family.

Abdolfatath Soltani is serving his seventh year of a ten-year prison sentence. During his incarceration, poor prison conditions, malnutrition, and lack of access to clean water led to various health problems for Mr Soltani including a broken tooth, psychological stress, irregular blood pressure, anaemia, and acute nervous colitis (nervous colon syndrome). His previous request for conditional release had been denied, and his appeals for a new hearing were ignored by the Iranian authorities.

Mr Soltani was arrested on September 10, 2011, and was subsequently sentenced to 18 years in prison and barred from practicing law for 20 years for accepting the International Nuremberg Human Rights Award in 2009, conducting interviews with media regarding his clients [who were mostly human rights, civil rights, student and political activists], and being a founding member of Defenders of Human Rights Centre. His sentence was eventually reduced by an appeals court to a 10-year prison term and a 2-year ban from practising law.

The following video shows the moment Abdolfattah Soltani stepped into his home after years in prison: