A Ukrainian citizen was arrested in Yazd 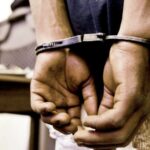