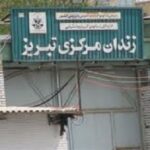 HRANA News Agency – With authentication of the identity of another prisoner who was executed in Tabriz Central Prison, the number of executions in this prison in one day rose to two. Both prisoners had been charged with murder and had been sentenced to death.

According to the report of Human Rights Activists News Agency in Iran (HRANA), Vaheed Fathullah Astani and another prisoner with the surname of “Ali Akbar” were executed in the central prison of Tabriz, on Tuesday April 18, 2017. END_OF_DOCUMENT_TOKEN_TO_BE_REPLACED