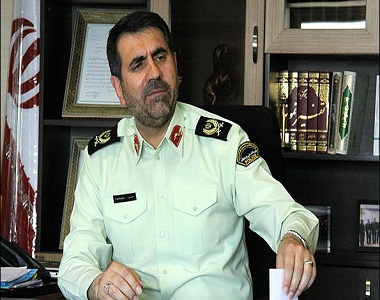 HRANA News Agency – The Chief of Police in Tehran, Hossein Sajedinia has announced the arrest of more than a hundred “Hooligans” in Tehran in the form of “dealing with disrupting the social order and norm-breakers”.  Informed sources have said to HRANA’s reporter that Police have forced them to confess against themselves by prohibiting phone calls and visits and having lawyer and beating them.

According to the sources of Human Rights Activists News Agency (HRANA), about 165 people in various parts of Tehran were arrested by the security forces in the form of “dealing with disrupting the social order and norm-breakers” from January to February.

Hossein Sajedinia said last week on the sidelines of the implementation of the scheme that  all people who were arrested in this scheme are from “the defendants with criminal records” that citizens demanded their arrest during their phone calls to emergency center of police.

The family of one of those who has been detained in this scheme said to the reporter of HRANA that several detainees had no criminal history and had been arrested for the first time and also had not been charged yet. While he asked to remain anonymous, said that during more than a month under detention, they had not had any contact and visit with their families and judicial authorities opposed their visits or any attempt to track their status with the excuse of “being in the band and scheme”.

A source informed of the status of detention mentioned that the number of detainees is 165 and all these people were beaten to accept various charges in the detention center of Iranian police criminal investigation department.

According to the source, although these are ex-offenders between these people, but some of the detainees were arrested for the first time, some are juveniles and also some were arrested later.

The source added that the Iranian police criminal investigation department according to these people’s location and without a degree, tortured them to accept the charges that occurred around the neighborhood.

“Being chicks”, “swiping the fingures to the sides”, “incessant slapping” and sexual insults and threats are part of the tortures that were applied on the defendants to make them confess in the absence of lawyers and any possibility of contact with the outside.

The judicial responsibility of all detainees’ cases rests with one judge and he said to referrers not to not follow up because there were so many cases and the proceedings would take time.

Hossein Raesi, lawyer said, “what we face in recent years as emergency plans to deal with thugs or gathering the drug addicts in cities across the country, are a clear violation of 22th article of the constitution. According to the principle of “the dignity, life, wealth, rights, house and shop of the individual are immune from invasion except in cases sanctioned by law.”

Mr. Resai said the behavior of the police and even ascribing the thugs to people even though they were accused of major crimes, was not prescribed by the public law, at all and was the clear violation of the constitution.

The university lecturer considered the action of the police as a crime and continued: “It takes place with a violation of their human dignity because they are punished before their charges would be proven in the competent court. This behavior is mainly due to the extreme weakness of the police in providing security to citizens and the failure in providing the suitable conditions for the normal life of citizens by the usual ways and the law. The inability of Police occurs by the silence of judiciary which are obliged to provide judicial security of citizens, even those accused of crimes.”

Hossein Raesi said about the main role of the judiciary and the executive against such encounters: “the police’s behavior is a kind of inexcusable authoritarianism. And I believe that the judiciary must be the guardian of people’s rights and prevent the police’s authoritarianism. The executive branch, particularly the Ministry of Interior and the President as the custodian of fundamental rights must stop insult and disrespectful behavior towards the citizens.”

“My point is that the people also should demonstrate their dissatisfaction against this behavior, and should not watch and consider that their security depends on insulting the youth. Undoubtedly, these behaviors will not reduce the crime but also these young people will be encouraged to more violence and revenge later.” He stated.