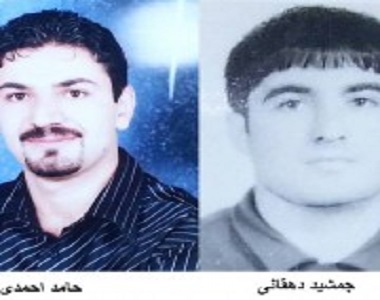 HRANA News Agency – Hamed Ahmadi and Jamshid Dehghani who had finished their hunger strike after 75 days, have faced sever health and physical issues.

According to the report of Human Rights Activists News Agency (HRANA), Hamed Ahmadi and Jamshid Deghani who were on hunger strike for 75 days, from November 4 until January 18, in protest to their death sentences and violation their rights as prisoners, are in bad health condition after 1 month from breaking the strike.

These two Sunni prisoners are suffering from bone, knee and stomach pain, and have difficulties with eating and digesting.

An informed source said to HRANA’s reporter: “These two prisoners cannot eat food and whenever they try, they suffer.”

Need to be mentioned, these prisoners broke their strike after the promise of prison chief and judiciary authorities for their transfer to Rajaei Shahr prison and retrial.

Jamshid Dehghani, Jahangir Dehghani, Kamal Moulatu and Hamed Ahmadi have been transferred to Rajaei Shahr prison on January 22, but two other Sunni prisoners with the names of Seyed Hadi Hossaini and Seddigh Mohamadi, are still kept in unit three of Ghezelhesar prison.