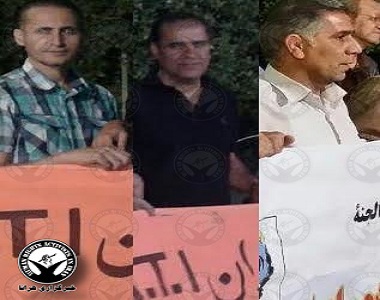 HRANA News Agency – Three labour activists in Fars province were arrested by the security forces in Shiraz. There is no information about these activists’ situation and whereabouts.

According the report of Human Rights Activists News Agency in Iran (HRANA), Shahab Karin Aghaei, Jafar Pazhoheshpour, and Hossein Esmaeili were arrested in front of Job Centre Department of Fars province, by the plainclothes agents, on Wednesday February 8, 2017.

These citizens were among the striking workers and protesters of “Iran’s Telecommunication Company” and have been active in organizing workers and employees of this company’s recent protests.

These activists’ houses were searched by the officers who had search warrants, and confiscated some of their belongings. They also were offensive toward their families.

Their families have no information about their condition and whereabouts.

Previously, employees and workers of I.T.I had gathered for several days to protest against leaving this company to some specific institutions and called for their last several months unpaid wages.

According to the sources close to the protesting workers, the county security and administrative authorities, “fiercely” confronted the workers.