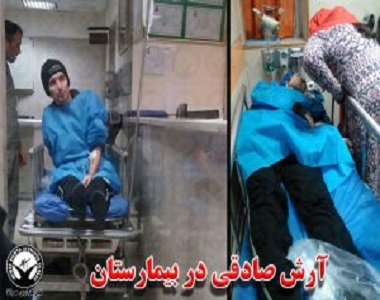 HRANA New Agency – Arash Sadeghi, imprisoned civil activist in ward 350 of Evin prison, has advanced stomach bleeding, so that he is “no longer able to eat solid food”. This prisoner, who is suffering from aspiratory chronic inflammation disease (asthma), stomach bleeding and intestinal colitis, caused by long term hunger strike, is still in prison and being deprived of treatment, due to opposing by the Iranian Revolutionary Guards.

On the other hand, since several weeks ago, Mr. Sadeghi and his wife, who is in the women’s ward of this prison, have been deprived of meeting each other. In addition, this prisoner has sued the judge and a prosecution officer.

According to the report of Human Rights Activists News Agency in Iran (HRANA), Arash Sadeghi civil activist in ward 350 of Evin prison, is “no longer able to eat solid food” due to advanced stomach bleeding caused by a long term hunger strike and lack of medical treatment.

An informed source, regarding Arash Sadeghi’s condition, told HRANA’s reporter: “Arash’s stomach bleeding has deteriorated severely so that he cannot eat solid food. As you know, there is no right food for Arash’s condition in ward 350 that he can buy from the buffet. This condition and not sending him to the hospital, has made his family extremely worried.”

This source went on saying: “On the other hand, since several weeks ago, Mr. Sadeghi and his wife, who is in the women’s ward of this prison, have been deprived of meeting each other. In addition, Arash has sued Judge Salavaty, and Mr. Hajimoradi, clerk in prosecution office, because of failure in addressing his case and his condition.”

Arash Sadeghi was transferred to Imam Khomeini hospital in Tehran and after some medical tests, on February 6, 2017, was returned to prison, while he had just ended his second hunger strike due to the prosecution’s promises.

This civil rights activist who had gone on hunger strike for the second time on January 22, at the same time as Golrokh Irai’s was arrested, was transferred to ward 350 on January 25, which is a place with minimum communication facilities with outside.

Mr. Sadeghi who started his second hunger strike just a few days after ending his first 71-day-long hunger strike, while being in a critical physical condition, has inappropriate health condition. Mr. Sadeghi had been transferred to ward 2-A of the Revolutionary Guards, in Evin prison, “under the pretext of” transition to hospital on January 25, and after three days he was transferred to ward 350. His personal belongings including his “watch and wedding ring” have disappeared in this moving.

Arash Sadeghi, civil activist imprisoned in Evin Prison, had started a hunger strike, demanding a fair trial to address the accusations against his wife, Golrokh Irai, which he ended after 71 days with the promise of considering his demands by the authorities, when his wife left the prison on January 3.

It should be mentioned that on his latest referral to the hospital the specialist doctor confirmed that he had stomach bleeding up to 12.5%, shortage of hemoglobin (anemia), serious and severe lung infection and had to be hospitalized for at least 4 to 5 days.

However, due to the prosecutor, prison security and Sarallh Corps pressure, this prisoner was returned to Evin prison on February 6, 2017.