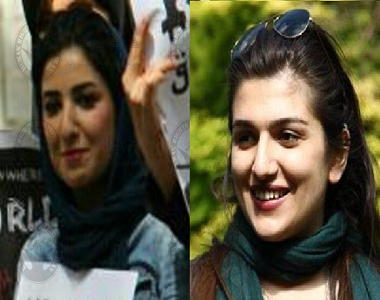 HRANA News Agency – Atena Farghdani and Ghoncheh Ghavami, who are in the same cell at ward 2A, went on ‘dry’ hunger strike from day ten of their hunger strike.

According to the report of Human Rights Activists News Agency (HRANA), Atena Farghdani and Ghoncheh Ghavami, who are held in the same cell at ward 2A of Revolutionary Guard in Evin prison, are on hunger strike since about 11 days ago and since October 11th are on ‘dry’ hunger strike.

Atena Farghdani, painter artist and children’s rights activist, was arrested in early September this year and no exact information regarding the charges against her has been obtained yet.

Ghoncheh Ghavami, a British-Iranian citizen, who had gone to watch a volleyball match in Azadi Stadium on 20th June this year was arrested and then released hours later.

A few days later, she went to get her personal belongings; she was arrested again and since 105 days ago she has been detained.

It should be noted that during ‘dry’ hunger strike, the striker avoids to drink water and other liquids, too.