The decision to speak out may have cost Iranian human rights activist Seyed Jamal Hosseini his life.

Jamal, the editor in chief of Human Rights Activist News Agency (HRANA) and the co-founder of Human Rights Activists in Iran (HRAI), spent the majority of his days in exile at his desk in a small apartment in Turkey. His tireless efforts earned him respect among Iranians inside and outside of the country, while making him the target of the Iranian authorities.

On the evening of 4 August, 2014 Jamal never left his desk. His lifeless body was discovered by the police the next day.

To date the circumstances of his death remain shrouded in mystery. No official causeof death for Jamal has ever been found by Turkish authorities, despite an extensive investigation and autopsy.

On the third anniversary of his death, we are reminded of the sacrifices and dangers faced by political activists in the region. Those activists who maintain their beliefs and resolve to carry on their activities and struggle. Jamal’s story is one of many. His story exemplifies the loneliness of exile, and of those activists who refuse to fade into obscurity or silence their passion to stand up to injustice. He led a life in limbo as a refugee. With his death came the injustice that often surrounds the many senseless deaths associated with repressive authorities.

Roots of resistance in Iran

Jamal’s own passion for political change began at a young age.  His uncle was one of many thousands of activists executed by the Iranian regime in the massacre of political prisoners in 1988. This was his first introduction to the harsh realities of justice in Iran. 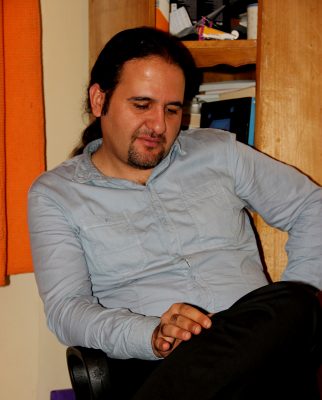 Seyed Jamal Hosseini in his home in Turkey. [Photo courtesy of HRANA]

As part of the first generation of Iranians to utilize the Internet as a political tool, Jamal penned numerous blog posts sharply critical of the regime. At night he distributed dissident literature in the city of Zanjan and was a part of Iran’s student protest movements – eventually leading to his brief imprisonment. In 2005, Iran’s Ministry of Intelligence identified Jamal’s blogs and raided his home in his absence. At the age of 24, Jamal knew his time in Iran had come to an end and left for Turkey.

Jamal was instrumental in the operation of HRAI. His duties ranged from technical and administrative work, to writing, reporting and translating. Jamal insisted in advocating for all Iranians, regardless of differences in their backgrounds or ideological beliefs.

“Jamal’s most notable legacy is ‘human rights for all’, which was demonstrated through his work for all sectors, religions and ethnic groups in Iran,” Rafiee told Global Voices.

During the 2009 presidential election HRANA was among the main organizations providing human rights news to the international community and detailing the arrests of political activists. The Iranian regime struck back in 2010 with a systematic and widespread attack against HRAI and its members. State forces rounded up HRAI activists in Iran, a move the ultimately forced HRAI’s budding operation to move its network and infrastructure outside of Iran.

Exile and death in Turkey

Jamal did not seek to promote himself or gain power. He was after neither money nor praise. Jamal maintained that with “empty hands but deep beliefs” he would continue the struggle for human rights along with those inside and outside of the country.

Jamal was the subject of numerous direct threats by the Iranian government. He began receiving anonymous phone calls in 2007. In 2010, this escalated to warnings from the Turkish Ministry of Intelligence.

Rafiee recalls that Jamal made a conscious decision to continue his path despite the threats he faced:

Jamal viewed the difficult moments of his life as a natural consequence of the path he had chosen as an activist. Therefore, he never wanted his body to be returned to Iran if he died, as he wanted to remind others to accept and remain honest about the consequences of their activism.

Today, three years after his passing, his death remains unexplained. A 15-page report by Turkish authorities claimed that the cause of death was inconclusive, because there was a delay in the autopsy, despite the fact that drops of blood were found on him and around his apartment. Friends and family members continue to maintain that Jamal was a healthy individual and that there was no evidence of a ‘natural’ death.

The Iranian regime has a long history of targeting political dissidents abroad, particularly in Turkey. This included a spate of extrajudicial killings in the 1990s, and reports that its embassy staff was engaged in spying and kidnapping within the country. One political prisoner Jamal wrote about was Hojat Zamani, a dissident who escaped to Turkey and was sent back to Iran by the Turkish authorities, only to be executed by the regime in 2003.

Rafiee fondly recalls the evenings he spent with Jamal, sitting behind a keyboard quietly working into the night. “No day goes by that we do not think of Jamal and his dedication.”

As HRANA seeks to continue their activities and Rafiee notes that Jamal serves as an inspiration and an ideal “behind every report we publish, every hardship we endure.”

In an era in which politics is dominated by individual agendas for power and control, Jamal stands out as a testament to quiet resolve and dedication. He demonstrated that in any corner of the world, an individual, however isolated, can use the tools around him to make a difference and challenge the legitimacy of a repressive regime.

Jamal’s legacy is important not only as a symbol of sacrifice but as a reminder that the struggle for human rights continues in Iran, with those on the front lines paying the ultimate price in order to stand up for what they believe in.