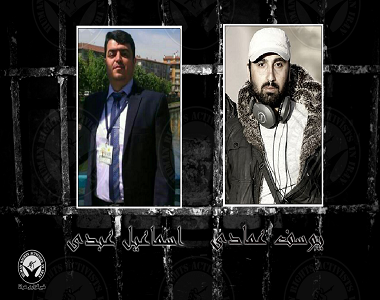 According to the report of Human Rights Activists News Agency in Iran (HRANA), Esmail Abdi, the Board member of ITTA of Tehran, and Yusuf Emadi, composer and Setar player, two prisoners in ward 7 of Evin prison, were transferred to ward 350 of Evin prison, without “prior notice and the prosecutor’s order”, on March 1, 2017.

It should be mentioned that ward 350 of Evin prison is a place with the minimum contact with outside and so far there is no information regarding the reason of these two prisoners’ transfer.

It is noteworthy that Esmail Abdi was arrested without a prior notice, at his home and was transferred to Evin prison, on November 9, 2015, after his 6 years imprisonment sentence was approved by the Court of Appeal.

Also, this teachers’ union activist’s request for a retrial was rejected. According to his lawyer, no specific reason was given to reject this request.

Yusuf Emadi, composer and Setar player, along with Rajabian brothers, two artists, had been sentenced to six years imprisonment and was fined, in the first place by Branch 28 of the Revolutionary Court, presided by Judge Moghiseh, on charges of insulting religious sanctities and propaganda against the regime. In Branch 54 of Tehran Appeals Court the sentences was changed to three years in prison, three years of probation and paying 200 million IRR fine.