Five Detainees in Borujerd under Pressure for False Confessions 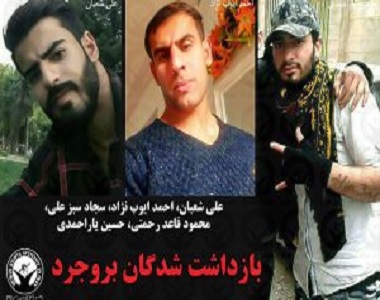 HRANA News Agency – The Ministry of Intelligence issued a statement announcing the arrest of “the core of the terrorist group in Borujerd”. The statement claimed that the core has played a role in subversive acts during the recent national protests. Also, a member of this group has been wounded in a clash during the arrest, according to the security agency. Two hours after the issuance of the announcement, two of the arrestees were brought to the provincial TV and confessed against themselves.

Close relatives to these people, in contact with HRANA, rejected the allegations and said “they were merely part of the protesters in recent events; two of the detainees referred to are known underground artists in the Lorestan region, and none of them has a previous prison record or previous political activity.” The families of these people are worried that their children will be victimized by the security system’s advertising scenarios, which have a background.

According to the report of Human Rights Activists News Agency in Iran (HRANA), while the Ministry of Intelligence’s statement claimed that these people had contact with the MEK on February 4, the family of these people denied these allegations, in a conversation with HRANA.

Ali Shaban, known as Alish, confessed against himself in the Provincial TV channel.
Although, the Ministry of Intelligence has not provided names and images of these individuals, but a few hours after this announcement, two of the arrestees confessed in front of the cameras of tLorestan province TV with covered faces.

The announcement also claimed that one of the detainees was shot wounded as a result of a clash with security forces during the arrest, but their relatives eventually ended their silence, and in a conversation with HRANA, described further details.

Hossein Yarahmadi is known as “Hiasat” and is an underground rapper whose songs have been published in cyberspace, including the song “Mehdi Beya” with the composition of Ali Shaban, known as “Alish”, the other arrestee of the same group.

Hossein Yarahmad’s close acquaintance told HRANA that he was arrested earlier, but these arrests were about his artistic and underground activities.

While securities officials are trying to identify these people as the perpetrators of violence and conflict in the recent protests in Lorestan, their families claim that these people were basically just participants in the protests, but because of being locally well-known, particularly for the youth of Lorestan, they have been the victim of a conspiracy.

A member of the family of the detainees also told HRANA that: “The person who they claim that was wounded in the conflict is “Mahmoud Gaed Rahmati” who was not in the conflict but when he saw the agents were arresting Sajjad, he got concerned and tried to flee, and then he was struck a shotgun on his scalp and one shot to his shoulder and one scratch his scalp, so, after the arrest, he was transferred to the hospital, and he was cared for a few days, and then was transferred to an undisclosed location.

Four detainees in Borujerd were residents of the same region, all of whom were arrested at 10 am on Friday February 4. At the same time, the fifth person was arrested in Tehran.