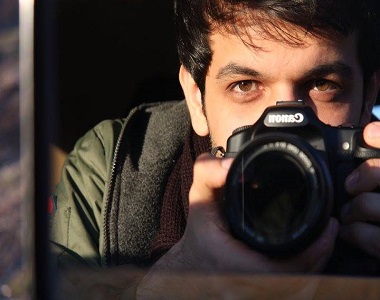 HRANA News Agency – Keivan Karimi, filmmaker who had been arrested to serve his sentence, was transferred to ward four of Evin Prison.

According to the report of Human Rights Activists News Agency in Iran (HRANA), Keivan Karimi had been kept in the quarantine of ward four in Evin prison since Wednesday, November 23.

Keivan Karimi, a prominent Iranian filmmaker, who had been summoned through a phone call to provide some explanations to the law enforcement at Branch one of Shahid Moghadas court, located in Evin prison in Tehran, was arrested there and was transferred to the quarantine in Evin prison to serve his sentence of 1 year imprisonment and 223 lashes, on Wednesday, November 23.

Keivan Karimi was sentenced to 6 years imprisonment and 223 lashes one year ago, due to a documentary film about the history of graffiti in Tehran city, called; “Writing on the City”, with charges of “propaganda against the Islamic Republic and blasphemy”, and then the imprisonment sentence was reduced to 1 year imprisonment and 5 years suspended imprisonment by the court of appeal.

Karimi announced, in an interview with Reuters, that he was not going to leave the country and the sentence would run, after the ruling was confirmed on the appeal court.

Keivan Karimi was arrested first at his house, after releasing his film, “Writing on the city”, on YouTube, in December 2013. He spent 12 days in solitary confinement in Evin prison and then was released on the bail.

The sentence of 6 years imprisonment and lashes for Keivan Karimi had yielded many international reactions. The first reaction was the statement by a group of philosophers, sociologists, writers and human rights activists, titled; “Poetry is a crime against the state”. After that, the National Association of Directors, Screenwriters, Actors and Cinema Activists in France and Italy, and the National Association of Italian Journalists and Film Critics protested in a statement to the verdict against Karimi and demanded his punishment being abolished. Also, 45 European MPs signed a joint statement, expressing their concerns about the condition of Karimi, calling for his immediate and unconditional release.

In this regard, Punto de Vista festival, in collaboration with the Foundation of “Navarro”, and “Jean Vigo” family, late Spanish filmmaker, launched a campaign in support of Keivan Karimi and invited 223 famous directors to record a word by their cameras and send it to the festival, to participate in making a short film, called “Word, Whip”, to protest the sentence of 223 lashes for this filmmaker. On the eve of the sixty-ninth Cannes Film Festival, the jury of the documentary section of the festival in a press statement called for continued international efforts to abolish this filmmaker’s sentence.

The film of “Writing on the city” which is a historical account of the wall writing and graffiti in Tehran since the beginning of the revolution in 1978 until after the Green Movement in Iran, has been shown in numerous international festivals, so far. The latest release of this documentary was in International Film Festival of Vienna in Austria, in November.

Karimi is now in Evin prison serving his sentence of one year imprisonment.