At Least 1 Prisoner Hanged in Isfahan 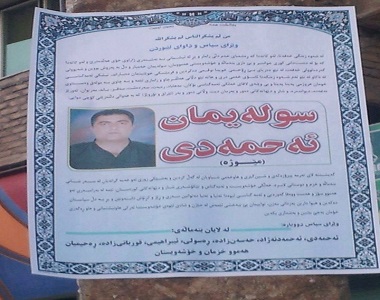 HRANA News Agency – Last Wednesday a prisoner with charges related to drugs, was executed in central prison of Isfahan.

According to the report of Human Rights Activists News Agency (HRANA), a prisoner identified as Solaiman Ahmadi, who was sentenced to death for drug related charges, was executed last Wednesday at dawn by hanging, on central prison of Isfahan.

Solaiman Ahmadi, the son of Hossain, was arrested three years ago and sentenced to death for drug related charges. He was the from Amir Abad village of Boukan town.