HRANA News Agency – While by the order of Prisons Organization, “warm cloths and blankets” should be given to the prisoners usually in December, this year it was banned by prison management and prisoners have to get required warm clothes from the prison shop, which has low quality and much higher prices than outside of prison. The main problem is that most of these prisoners cannot afford such prices.
According to the report of Human Rights Activists News Agency (HRANA), receiving clothes and blankets which every year were announced usually in late December as a norm by prisons organization, has been banned by Ghezelhesar prison’s management.
A family member of one of these prisoners in Ghezelhesar prison told HRANA’s reporter, “Each year in December they scheduled a time period for this, but after the opening of prison shop with the name of Hami, Ghezelhesar prison’s management banned receiving clothes from the family and stated that families have to buy from this shop and send it to the prisoners”.
Another informed source, confirmed this news and said, “It needs to be noted that first, some families cannot afford buying from this shod, and second, provided clothes in this shop are very expensive and have very low quality”.
He continued, “For example a simple pair of pants could be purchased in market for around 280000 IRR. While a very low quality – similar to a used one – is being sold in this shop for about 650000 IRR”.
This informed source also emphasized, “This years is much colder than the previous years, and the dry-cold weather of Ghezelhesar, normally is colder than other regions in Tehran and Alborz provinces. On the other hand, prisoners have to go to the yard early morning, because the hall’s door will be closed. We the families, really do not know what to do and how to handle this problem, and we are very concerned about the health of our family members”.
Ghezelhesar prisn, is one the largest prisons in Iran which was built in 1963 in Kianmehr area, located in south-west of Karaj. This prison has 9 sections, 7 visitor halls, 14 offices, courts, and an office called “civil rights respecting unit”.
Different sections where the prisoners are being kept in are as following: 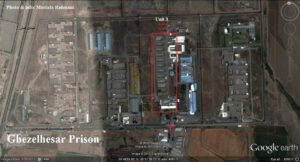 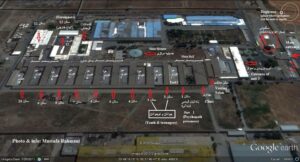 Even though Ghezelhesar prison is located in Alborz province, but according to prisons’ organization, it should be supervised under Tehran’s prison bureau.