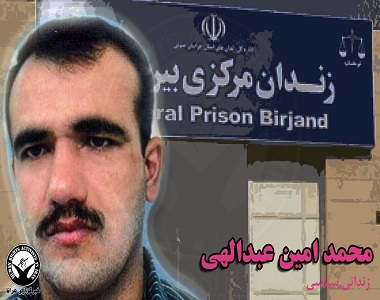 HRANA News Agency – Mohammad Amin Abdollahi, exiled political prisoner in the eleventh year of imprisonment, was sent to a 12-day furlough from Birjand Prison on the bail of 1 billion IRR.

According to the report of Human Rights Activists News Agency in Iran (HRANA), Mohammad Amin Abdollahi, exiled political prisoner in the eleventh year of imprisonment, was sent to a 12-day furlough.

A close source to the political prisoners told HRANA’s reporter: “Mohammed Amin suffered from digestive problems due to pervious hunger strikes and also has been experiencing vision problems. His furlough and treatment requests were being denied, but finally his 12-day furlough on the bail of 1 billion IRR was accepted.  But his furlough have been set in the system of prison on July 25, it means he was sent to furlough a day later.”

Mohammad Amin Abdollahi was arrested in 2005 and was sentenced to 18 years in prison and exiled to Tabas prison on charge of Muharebeh through effective collaboration with one of the opposition parties, as well as propaganda against the system in Mahabad revolutionary court after 15 months of detention.

The civilian from Bukan was transferred to Tabas prison in 2013 and was sent to Birjand Prison while he was on hunger strike in 2015.

It is worth noting, Mohammad Abdollahi, the brother of this political prisoner was sentenced to death on charge of Muharebeh and is now kept in Central Prison of Orumiyeh.